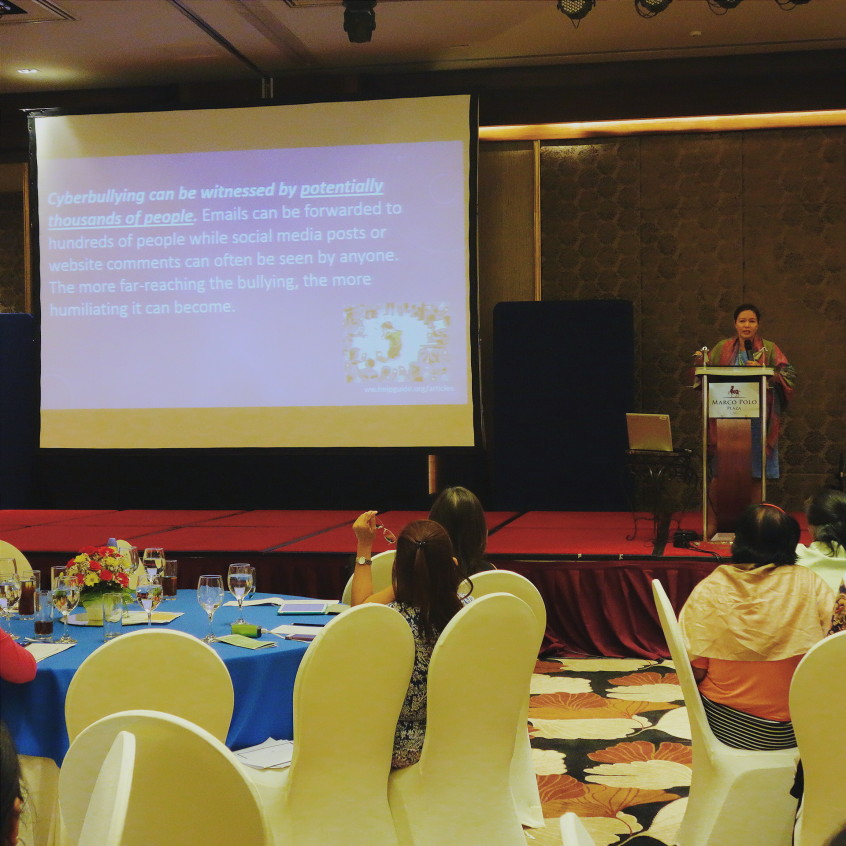 A group of psychologists, and experts and advocates of online safety spelled out the many types and threats of cyberbullying at a simultaneous session during the Ako Para Sa Bata 2015: Cyberprotection of Children conference held at Marco Polo Plaza Cebu on December 1 and 2, 2015.

Growing up with gadgets and the Internet has made the cyberworld crucial to digital natives’ personal lives. “Many teens’ self-esteem is connected to how many likes or followers” they have, said Priscilla Gonzalez-Fernando, founding board member of the Philippine Association for Child and Play Therapy (PhilPlay). “For them, the cyberworld is their neighborhood, so anything that happens there is very, very important to them.”

This neighborhood comes with both great potential to connect with friends and family and overwhelming risks to be a perpetrator’s target. Cyberbullying is unique because it can be done anonymously and relentlessly, making it so easy and safe for the bully. “They don’t see the face of the one they’re hurting, not like in the playground,” said Fernando.

Unlike in a physical setting too, cyberbullying may reach you anywhere you are and be witnessed by many. You can receive a threatening text message or notification from a social networking site while in class or at the comfort of your home. “It’s very invasive; it invades our life, just like how cellphones invaded our life. And the damage inflicted can be so great,” said Fernando.

Fernando said the effects on teens and children include feeling alone, sad and embarrassed, with apparent changes in sleeping and eating patterns. They will show signs of not wanting to do things they used to do, they might stop going to school, lose their self-esteem and trust in people, and even reach the point of trying to kill themselves.

But who does such things to victims? There are various ways to categorize cyberbullies, and here’s a suggestion from Fernando:

The environment of bullying, whether online or offline, involves not just the bully and the bullied but also the bystanders, who are often caught between possibly defending the bullied and staying quiet to avoid being bullied themselves.

“Every little thing that we do affects the person who bully and the person being bullied, so actually there are no real bystanders,” explained Fernando. “Kids who witness cyberbullying by receiving messages or forwarding them to others don’t consider themselves as being part of the problem. Forwarding hurtful messages or content increase the number of people who witness the bullying of another by thousands instantly. Liking a message or passing it on tells the person who is cyberbullying that his behavior is okay and it makes it easier for that person to become more aggressive and vicious.”

So instead of becoming passive promoters of cyberbullying, bystanders must reach out to victims. “When we’re witnessing cyberbullying, don’t assume that it’s a private matter. Cyberbullying is not a private matter, it is to hurt the person publicly,” said Fernando. “The most important step is opening the lines of communication, because the most intense feeling of a person being cyberbullied is they feel so alone.” If you reach out, “they will have the courage to come out.”

Fernando enumerated more concrete steps on how to assist and support cyberbullying victims:

Related:  #APSB2015: (2/2) The social cyberspace and the threat of online child abuse