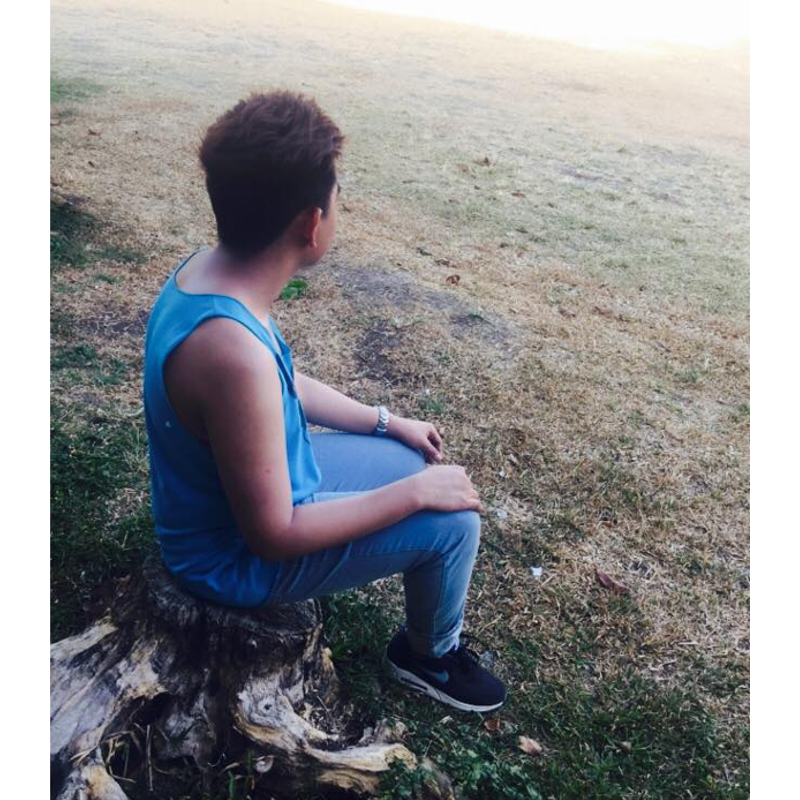 Do you wake up every day with the searing thought that nobody loves you? RJ does—he wakes up with that thought every single day.

If you’re a Sillimanian, you might have seen a relatively tall and skinny guy with dark hazel barber’s cut hair, walking around campus with his, yes, 6-inch black heels, shorts that are never afraid to show too much, and undoubtedly noticeable make-up decorated all over his face. When not clad in all-white, this guy who might have caught your attention is a former dormer whose name this story begs to be withheld.

Let’s call him “RJ.” This is the story behind the makeup.

“Remove your makeup, RJ,” a friend said, “because someone will love you for who you are.” | Supplied photo

After discovering that he had a liking for the same sex when he was just four years old, RJ dreamt only of living a life that was founded on genuine happiness: a kind of happiness that, according to him, is impossible to get given the fact that he is homosexual.

RJ’s frustrations about his sexuality were highlighted when he developed a phobia during his freshman year in high school. He fell in love with a guy who, at the end of the day, betrayed him, made fun of him, and eventually let his own friends turn against him. From then on, RJ developed a fear of men, scared that what happened to him might happen again.

During his sophomore year, he finally opened up to his mom about being gay. Growing up in a very religious Protestant family, this was not immediately accepted. “My parents made me go through several psychotherapy sessions to prove if I was really gay or not,” RJ said. After finding out, his parents comforted him but didn’t necessarily accept him.

“They forced me to be straight,” he added, “because they said it’s against God’s will.”

“Wala najud koy mabuhat ani (I can’t do anything about this anymore),” RJ said as he recalled that he heard his parents crying one night. As a result, RJ still chose to respect his parents by wearing less feminine clothes and getting rid of all the makeup in his secret stash.

Media has reinforced the perception of gay job stereotypes as beauticians, fashion gurus or musical/theater buffs. However, RJ doesn’t want to be stereotyped in that sense, saying: “I’m not into beauty pageants and I don’t want to be specifically involved sa clothing technology. Because if you’re gay, it doesn’t mean you have to act like the stereotyped gay. Act like a girl!”

According to RJ, gay marriage is okay but being in a boy-girl relationship is much more different: that’s why he wants to undergo a sex change operation in the near future.

“I haven’t told my parents yet kay dili pa lang nila ma-keri (they might not be able to handle it)!” RJ continues: “Let’s admit it, straight guys will not like gay guys 100%! It’s either the guy who loves you is bisexual or gay. Real, straight guys prefer transgenders. So, diba, why not?” RJ says that the rationale behind wanting to be a transgender is based on the fact that he wants genuine happiness in love. He believes that being gay has stopped him from getting genuine happiness.

But at the end of the day, amid the crisis surrounding him, RJ still runs to Lady Gaga for inspiration. Listening to her music has taught him to never be afraid.

“Ngano man nimo i-hide imong self? (Why would you hide your true self?) Fight for your right. You’re still human being. If you know you’re not doing anything bad, then that’s okay,” RJ adds. “Be who you are. Express yourself!”

RJ also wants to send out to all gay men the message that they should know their limitations. According to him, this would also help to break the stigma for gay men: sex for pay. “Having sex is not about satisfaction and pleasure. It’s about love. If you love someone and he loves you back, that’s sex.”

Truly, all he longs for are genuine happiness and true love. Despite the bullying, despite the rejection, despite having the need to look like a woman, and despite trying to keep his own head up, one question RJ asks himself every day is when he could find true love given his circumstance, a situation that speaks for so many people to this very day.

Maybe all that RJ needs to remember is one thing a friend whom he fell in love with said: “Remove your makeup, RJ, because someone will love you for who you are.”