A world of 7 billion people is no walk in the park.

Among the world’s many problems, the emergence of diseases may be one of the hardest to curb. In recent years, more and more kinds of health conditions are diagnosed, which are brought about by the many developments that have changed our lifestyle and daily living. 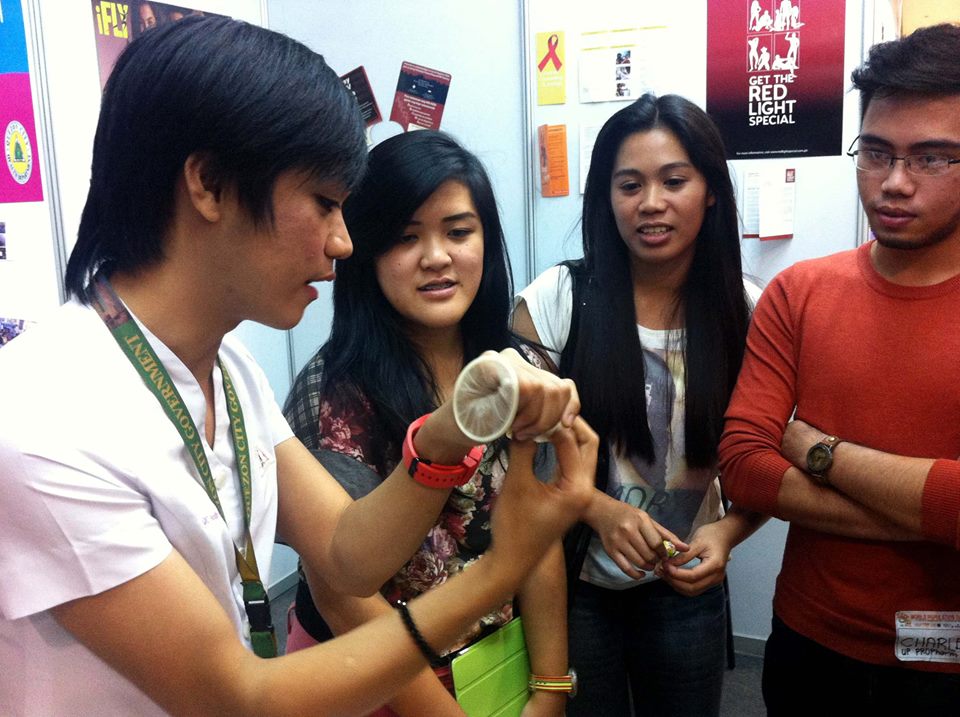 HIV attacks a key part of our body’s immune system—CD4 cells, or T-cells. CD4 cells are responsible for sending signals to activate our body’s immune response when they detect intruders in our system such as viruses or bacteria.

“It’s a virus that has the capability to weaken the immune system,” says Devine David, an HIV Peer Counselor from Klinika Bernardo, a social hygiene clinic of the Quezon City Health Department.

When HIV destroys so many of these cells, our body can’t fight infections and diseases anymore. When this happens, HIV infection can lead to AIDS. But not everyone infected with HIV progresses to AIDS. Do note that AIDS is a syndrome, rather than a single disease: it is a complex illness with a wide range of symptoms.

Music legend Freddie Mercury, vocalist and lyricist of the British rock band Queen, died of AIDS-related bronchial pneumonia. Since its first cases were reported in 1981, the disease has claimed 39 million lives, and at the end of 2013, 35 million people were living with HIV (People Living with HIV, or PLHIV).

In the Philippines, the reported cases of HIV infections for 2013 alone reached nearly 5,000, according to the Department of Health (DOH). While the prevalence was still low, UNICEF said the country was one of only seven countries globally where the number of new HIV cases had increased over 25% from 2001 to 2009. The infections were largely attributed to specific risk behaviors, such as unprotected sex. 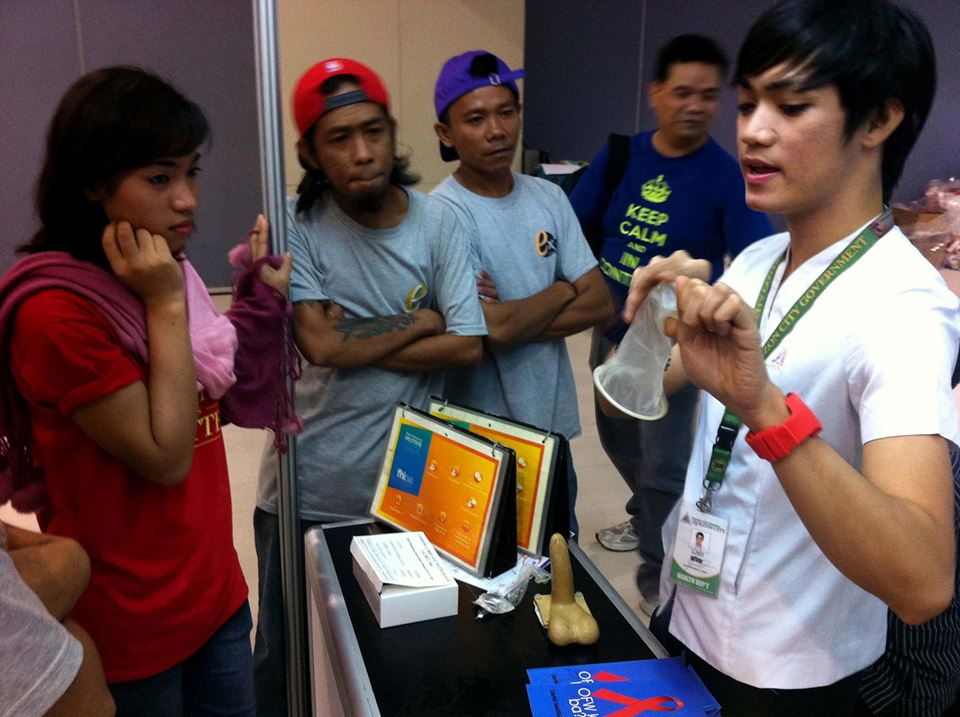 Other factors also affect the risk factor of contracting HIV among adolescents.

David explains further: “The risk of contracting HIV depends on the individual’s sexual behavior, as well as other factors like drugs, alcohol, and peer pressure.” The primary prevention of infection has to start during adolescence, according to UNICEF, mainly because contraction now occurs at a younger age. The phenomenon is reflected in the DOH-HIV Registry’s records, where the majority of registered PLHIV belong to the 15-24 years old age group.

HIV can be transmitted via the exchange of body fluids from infected individuals: blood, breast milk, semen, and vaginal secretions. David said common misconceptions about contracting HIV include mosquito bites, using public toilets, and taking care of PLHIVs. According to the World Health Organization (WHO), individuals cannot become infected through ordinary day-to-day contact such as kissing, hugging, shaking hands, or sharing personal objects, food or water.

Unfortunately, there is still no cure for HIV. The existing treatment is called antiretroviral therapy (ART), which keeps the level of the virus in the body low. ART enables PLHIV to live a longer and healthier life, and reduces the risk of transmitting the virus to others.

In the absence of a cure for HIV, the best protection is prevention. David endorses five preventive ways to avoid getting HIV:

A—Abstinence;
B—Be mutually faithful and loyal to your partner;
C—Correct and consistent use of condom and lubricants;
D—Don’t share used needles / don’t use drugs and alcohol; and
E—Education, early detection and early treatment. 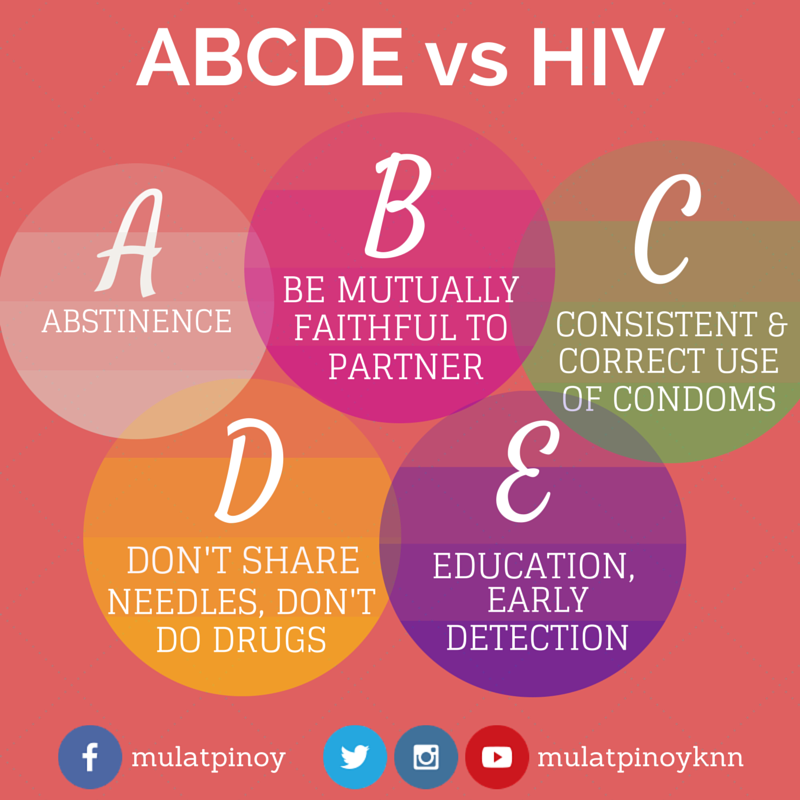 ABCDE vs HIV | Infographic by Rocel Ann Junio for MP-KNN

“Minors who are engaged in high-risk behavior usually do not avail of free condoms and HIV counseling and testing, because their parents would find out about their early sexual engagement,” David explains, based on his experience as a counselor. “There are also fears of being branded a homosexual. And for those in relationships, use of condom is considered by some as an infidelity issue. Some men also say there is less pleasure in sex when it is used.”

Of the preventive measures enumerated, education is still the best defense: proper knowledge of the disease and awareness of available programs from the government. David says: “We should all be open-minded regarding the issue, most especially about the realities involving the disease. Do not be afraid to ask. Be inquisitive. Read. Only through knowing can you be equipped with the information you need to protect yourself, your family, and friends from the disease.”

Youth Reporter at MP-KNN
Luis is a journalism graduate from the UP College of Mass Communication, and a member of UP Aperture, the only photojournalism student organization in UP Diliman. He spends his time reading books, watching films, and surfing the internet. When not at home, he is out and about birdwatching or practicing his photography.