News reports have confirmed that the Supreme Court is expected to make its final decision on the legality of the Reproductive Health Law on 8 April 2014 during its summer session in Baguio City. It’s been a year since the SC issued a Status Quo Ante Order (SQAO) against the law’s implementation, and for most of RH advocates privy with relevant statistics, that’s another year’s worth of increase in unwanted and teenage pregnancies, inaccessibility to maternal and child care, and increased incidences of HIV and other sexually transmitted infections.

We made a list of why the SC must #UpholdRHLaw now, with opinions from experts and interviews from those most affected by the RH Law.

The Reproductive Health Law would have protected women like Cabinyan and Duran; it would benefit their husbands and their children.

Last December 21, 2012, President Aquino quietly, discreetly, signed the RH Bill into law. Presumably, he did not want to upset the Catholic block but wanted to keep his promise to do right by the women like Cabinyan and Duran.

In the one year that the has passed since the RH Law has been languishing in the Supreme Court, three disasters—both manmade and natural—struck the Philippines: the Zamboanga siege, the Bohol earthquake and super typhoon Yolanda (Haiyan).

“If the RH Law had been implemented as planned, there definitely would have been lesser pregnancies, more RH services and systems in place. It would have been easier for the government to deal with these disasters,” said Beth Angsioco chairperson of the Democratic Socialist Women of the Philippines (DSWP).

A year after the SQAO on the RH Law, SC urged to rule on its constitutionality by Akbayan Partylist 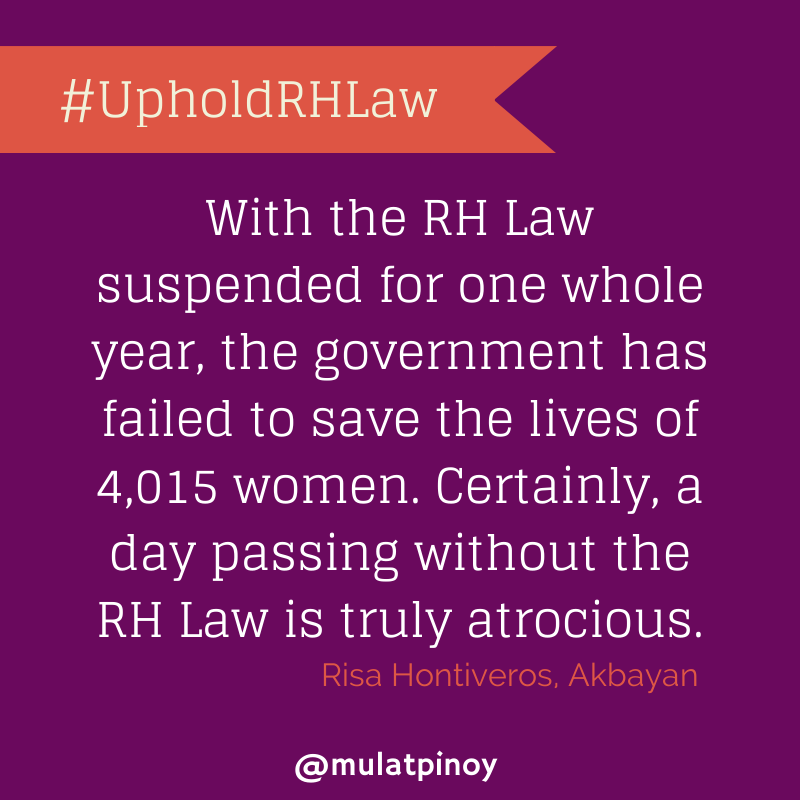 Hontiveros said a year without the RH Law is one year too much.

“The consequences are just too costly. With the SQAO in full effect, it prevented us from changing the status quo where 11 women die everyday as a result of the lack of reproductive health services,” Hontiveros said.

“By simply going through the numbers, with the RH Law suspended for one whole year; the government has failed to save the lives of 4,015 women. Certainly, a day passing without the RH Law is truly atrocious,” Hontiveros added.

Aside from the women, Hontiveros said the SQAO on the RH Law also dealt a big blow to the Filipino youth.

“Another victim of this unnecessary and long delay is the youth. Without a progressive policy tool, young Filipinos are prevented from receiving correct and proper education on sex and sexuality, education that is very crucial as they confront the climate of ignorance which caused many among their ranks to become victims of unwanted teenage pregnancies and sexually-transmitted diseases,” Hontiveros said.

However, Hontiveros said she welcomes the pronouncement made by the high tribunal that it will rule on the RH Law this April.

“While we hoped that the SC will decide on this matter much earlier, we nonetheless welcome the pronouncement. April being the spring month, we hope the high tribunal’s decision will enable the RH Law to fully blossom as it tries to provide the public a greater chance at a better quality of life,” Hontiveros said.

SC urged to affirm legality of RH Law by Leila B. Salaverria

Teenage pregnancies cause complications, especially for those from impoverished families. They may be kicked out of their homes by their families and forced to stop schooling, leaving them with little resources to care for their children.

Pregnant adolescents are also more likely to have unsafe abortions, according to the World Health Organization.

If the RH law is implemented, these teenagers can be educated on the facts about their sexuality and reproductive health, Cabral told a press briefing.

“The call of the Purple Ribbon campaign to the … Justices of the Supreme Court is to take into consideration the future of the youth and women and uphold the RH law,” Cabral said in a press briefing.

The latest data from the National Statistics Office show that in 2010 alone, 570 girls below 19 years old give birth every day. The data shows that poor teenage girls are five times more likely to have begun motherhood than wealthy ones.

“These are young people who should have benefited from the sex education program under the new law,” Cabral told ucanews.com in an interview.

She said the bishops object to the inclusion of reproductive health and sex education in schools because they think that the issue should not be talked about, or that it should only be discussed between parents and children.

Cabral, however, said she hopes that the country’s bishops will heed the call of Pope Francis for “less talk and more action, action that will show mercy.”