This is the third in a series of Mulat Pinoy’s coverage of selected topics from the 1st National Summit on Teen Pregnancy, conducted on September 14, 2012 at the Heritage Hotel, Manila.

Tuesday then asked Andi: if she could sum up her experiences in one word, what would that word be? Andi responded with the word, “change.” She explained that she picked that word because it is the one thing that you will constantly experience all throughout your life.

Andi explained further that, “there will be things that you can expect, but there will be a great many more that you can’t. Just always believe in your abilities and always think positive. All things can be beautiful and seen as a blessing if you choose to look at it that way.” Since her initial experience as a teenage mother, Andi had learned to embrace change, and even though she didn’t see herself in the situation she is now when she was younger, it was okay. “You learn to roll with the punches,” she said, “and as a result, you become more responsible.” 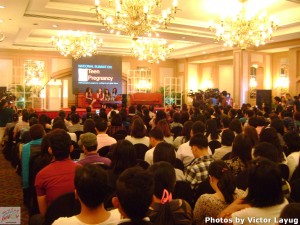 Tuesday’s next question, meant for all three women, was: “Why is it difficult to become a teenage mother?”

Angeline responded first, by saying that if you were to become a teenage parent, it’s very difficult because you don’t get to enjoy your youth; it’s as if you’re forced to put your on growth on hold while you guide the growth of another.

When it was Dorilyn’s turn to answer, she hesitated for a few moments and had to ask what her sister said. Tuesday joked that since Dorilyn now has 3 children, she might be becoming forgetful of the things around her, which the crowd found funny. After the well-meaning laughter died down, Dorilyn then answered that its very difficult, because you don’t know what to do or how to approach things, or how to take care of your own body while carrying your child.

Andi’s answer was that experience is the best teacher, and that as every moment that passes, you learn more and more. “You become wiser,” she said, “and that’s why its so difficult to become a mother at a young age, because you still have a lot to experience,  experiences which you have a right to as a child, as a teenager, as a person. Once you have your own set of experiences, it is with these experiences that you build who you are, what you believe in, what you stand for, what your principles are, where you come from.”

To conclude the discussion, Tuesday asked the trio if they regretted anything.

Angeline said that she regretted not being able to have finished her studies. While she could choose to continue them now, it would undoubtedly be very difficult to study and raise a child at the same time. She also felt very sorry for her family, whom she knows she hurt when she told them she was pregnant. However, she knew she would regret it even more if she doesn’t do her best for her child, and that if there was anything she learned from her experience, it was that before you do the things you want to do, you should take into account the potential consequences.

Dorilyn also regretted that she did not finish her studies and that she wasn’t able to give her parents the dream they had for her. She did, however, learn how to handle children in a way that wouldn’t suffocate them, so that they wouldn’t feel what she felt so as to avoid it becoming a vicious cycle.

Andi said that she regretted nothing; she believed that everything that had happened in her life had a purpose, and that everything she had achieved and wants to achieve in her life would not have been possible if not for every little thing that had happened to her, including what others may perceive as bad things. She went on to say that everyone wants to finish their studies, and parents, on the other hand, don’t want their children to be forced into early parenthood. The experience also taught her that there is a lot to be learned outside of school, and that God doesn’t only listen while you’re in Church. “You only live once,” she said, “and it doesn’t mean that what others deem right for themselves is also right for you.”

At the conclusion of the panel discussion, everyone agreed on a very bright, positive side of everything that they had all been through: Andi, Dorilyn and Angeline were all able to give their parents adorable little grandchildren to love, cherish and play with.

One Comment on ““Teen Pregnancy in the Philippines: Facts, Trends and Issues, Part 3””