This is the second in a series of Mulat Pinoy’s coverage of selected topics from the 1st National Summit on Teen Pregnancy, conducted on September 14, 2012 at the Heritage Hotel, Manila. 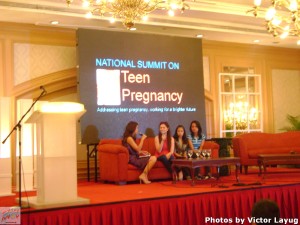 When Angeline first learned that she was pregnant, she did not know whom to approach, and thus first approached her friends for advice since she was afraid that her parents would get mad if she told them. Her friends, however, gave her numerous amounts of advice, some good and some bad. But they did eventually help her tell her parents, who were very supportive.

Angeline went on to state that it was very difficult, and there were times when she thought that she couldn’t handle it. Like her sister, she didn’t always have the funds with which to purchase the necessary pre-natal vitamins. Over and above the physical difficulty of being with child, it was also very difficult emotionally and psychologically since she knew that people were talking about her and saying unpleasant things about her.

When both Dorilyn and Angeline were asked about their lives at present, Angeline said that it is very difficult for her especially since she now has three children. While she now knows the difficulty motherhood entails, she also said that she has a strong protectiveness with regards to her children. The sudden onset of motherhood made her realize that she was no longer a child, and she better understood the mindset of parents when it comes to making decisions for their children. Dorilyn, in turn, said that she also now understands that she has certain obligations and duties to perform as a parent.

Tuesday then asked, what if their children were in a similar situation in the future, wherein they, while teenagers, had children. Angeline said that she would accept the situation together with her children; she would help raise her grandchildren. She wouldn’t leave her child’s side, and she would be very supportive. Dorilyn responded by saying that even at a young age, she would teach her children about the perils and blessings of being a teenage parent, so her experience may serve both as a guide and as a warning.

The third speaker for the panel discussion was Andi Eigenmann: an actress and model who gained popularity for her role in the primetime series Agua Bendita.

Andi began her segment of the discussion by saying that she was happy that even after her pregnancy, she was able to return to her industry as if nothing happened. After recovering from childbirth, she had a role in television as well as in several movies. She went on to state that while listening to Angeline and Dorilyn, she could relate since their experiences were similar to one another. They all became mothers at a time in their lives when they weren’t necessarily ready, and the most noticeable thing that differed from one case to another was how each mother handled the difficulty that goes along with motherhood.

When Tuesday asked Andi about her initial reaction when she found out she was pregnant, Andi responded by saying that she was understandably scared. Despite being employed and having finished her studies, she was still living under the same roof as her parents, and she was fearful of their reaction because she wanted to maintain how her parents were proud of her. Like Angeline, she first approached friends for advice.

When the friends she consulted asked her if she was going to keep the baby, Andi responded by stating that not keeping the baby was an option she didn’t even entertain, because her baby represented life and she didn’t want to become a murderer. She wasn’t a bad person just because she landed herself in a situation that wasn’t exactly admirable, and so she carried on with her decision to keep the baby, which she believes is the right decision.

Andi explained that the decision-making process was between her and her boyfriend, and when she eventually came to her decision, she approached her sister who would understand since she had had her own first child at 17. Andi went on to say that she knew that she hurt her parents, because no parent would ask that their child to be a parent before being ready. She chose to live by the words her mom always taught her: “Think positive and always believe in yourself, in God.”

Despite being hurt by the news, Andi explained that her mom did not show it because she knew she needed to be strong for Andi. Andi concluded her story by saying, “no matter what happens, your parents know what’s best for you.”

One Comment on ““Teen Pregnancy in the Philippines: Facts, Trends and Issues, Part 2””