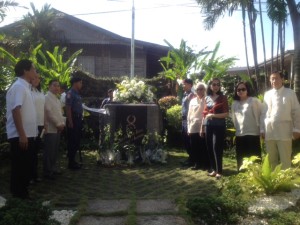 On March 9, 2012, it was very hot in Laguna. I was preparing for my usual routine, before going to the house construction I was finishing and then some events for the Philippine Information Agency, for which I am the new Regional Media Coordinator for Cavite, Laguna, Batangas and Quezon. There was something special about that day: it was the birthday commemoration of General Paciano Mercado Rizal, one of Jose Rizal’s staunch supporters back when the latter was living in Calamba.

Some notable people who also attended came from the National Historical Commission of the Philippines: Commissioner Dr. Rene Escalante, Commissioner Ferdinand C. Llanes, and Executive Director III Ludovico D. Badoy. Also in attendance were the Vice Mayor of Los Banos, Board Members Rey Paras and Andrew Nocon, and some politicians. 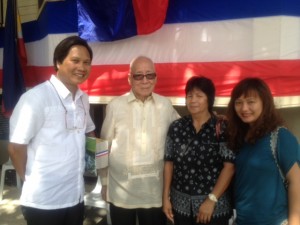 Father Jose Segudo celebrated a Mass before the opening of the program. The program included a flower offering at the General’s tomb, as well as a 21-gun salute. With all of General Paciano’s hard work and support for the Philippine revolution, however, I felt that it wasn’t enough.

How many children right now know his stories? How many know about his martyrdom when he joined the Katipunan? Can we blame today’s kids for not recognizing him if even today’s adults don’t make the time to learn about him?
General Paciano Rizal played a vital role in Jose Rizal’s life. As Jose’s only brother, Paciano was the one who helped him financially and supported him through all his challenges, such as dealing with the Spaniards and his fight for Philippine freedom and democracy using his writings.

Paciano joined the Katipunan after Jose was shot at Bagumbayan. He also became the treasurer of the Revolutionary Government under General Emilio Aguinaldo because of his integrity, and because he fought for the rights of the Filipino people. He died peacefully at his house in Los Baños, Laguna at the age of 79.

Jose Rizal Lopez, Paciano’s descendant, is 87 years old now. He looks very respectable, modest, humble and articulate. Curious, I asked him about his feelings having national heroes as relatives. He said, nanliliit sya brcause his achievements are nothing compared to what his Lolo Ciano did. He also shared that his Lolo was an introvert and silent, maybe because of the tortures he experienced. He was also very careful in order for his brother and family to be saved from the Spaniards. He chose to be a farmer instead of assuming a military rank under the offer that the United States gave him. 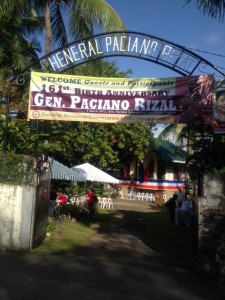 Paciano’s house is just beside the Municipal hall of Los Baños. I conclude that he was rich from all the hard work he did. I observe that most of his descendants are successful in their own way, maybe because it’s in their blood to pursue lofty goals. Today, with 100 million Filipinos who are in need of leaders, we need inspiration. We need people to lead with honesty and integrity.

I realize that, as a common Juana, I could do more. We can all do more, just like Paciano. Even though most people don’t know him other than as a brother of our National Hero, we can still learn from his example and do our part to support what we think is right.

Because of poverty and a lack of means, even kids now are working hard just to make ends meet. Filipinos have extended families. Our parents treasure us, and as much as possible would love to take care of us even when we reach adulthood. We go abroad to work as OFWs to support our families. Filipinos sacrifice a lot, even to be far from our loved ones, in order for them to survive.

We can be just like Paciano, who worked as a farmer when he supported young Jose’s education. He was willing to do everything for his family. Filipinos then and now are the same. We do what we can for the sake of others. We still have the spirit of Paciano with us: the question is, when shall we follow in his footsteps?