Since we transferred to this new place, I got used to sitting beside kids in school uniforms and slippers inside the jeep whenever I go home at around seven o’clock in the evening. It took me a while to realize that seeing them at that time is a result of class schedules compressed by public schools to accommodate the high number of students they have. This is a thread in the web of problems the Philippine education system is facing, even after many administrations have passed, and despite the formation of the Commission on Higher Education, the passage of the Technical Education and Skills Development Act of 1994, and the launch of the Department of Education (DepEd).

Nothing has actually happened.

When will something happen? When will local documentary films and shows stop featuring poor students eating only kamote or banana and walking for two hours just to get to their roofless schools every day? When will the government refrain from implementing one-day pakain and linis drives when June comes, and instead get to the real, concrete issues?

It seems like DepEd, as well as the House of Representatives, doesn’t see it happening yet.

The department has proposed the K-6-4-2 model, which aims to make students go through Kindergarten, six years of elementary education, four years of junior high school, and two years of senior high school. According to the government’s briefer, these two years will allow students to “consolidate acquired academic skills and competencies.” It furthers that this period will give them time to reflect on the career they want to pursue.

Sounds good, right? But not everything that sounds good is right.

Let us dissect some of the model’s “good” objectives: 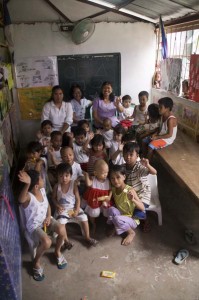 In a report, DepEd Secretary Armin Luistro revealed that they will craft a curriculum that would “allow a high school graduate to get employment.” A disadvantage of this goal is it might discourage the poor students to strive to finish college to get not just employment, but good employment. Let us not turn them into American high school students since most of them rarely consider college education as a tool to be successful in the workplace. Yes, practical skills and attitude are important at work, but how will you apply such skills without a solid basis? How will one operate a machine more efficiently and more successfully if one does not know the materials the machine is made of?

However, we must understand and accept that some families are not capable of giving their children even the slightest chance to march at PICC to receive their college diploma. With this, I suggest that the proposed scheme should be optional, and this suggestion is based on one of its claimed objectives:

“Minus 2 instead of plus 2 for those families who cannot afford a college education but still wish to have their children find a good paying job. Right now, parents spend for at least 4 years of college to have an employable child. In our model, parents will not pay for 2 years of basic education that will give them an employable child. In effect, we are saving parents 2 years of expenses. The plan is not “Plus 2 years before graduation” but “Minus 2 years before work.”

If it will be enforced across all schools, then we have a problem, as usual.

Br. Luistro has already acknowledged the concerns about the scheme in a report: “the political and financial sustainability of the program, the legislative and budget concerns, doubts in the unified implementation by DepEd, CHED, and TESDA, the amount of time spent by students in schools, and issues on inter-agency collaboration from local communities.”

It is just ironic that the proposal is still on the frying pan, when the DepEd secretary also admits that the country has a problem with the scarcity of teachers, classrooms, facilities, books, and other school supplies. In a TV interview last June, he stressed DepEd’s plan to put the spotlight on recruiting more teachers to resolve the deranged teacher-to-student ratio. How can we focus on the main challenges facing the system when we are trying to launch a new and, according to Emmalyn Policarpio, spokesperson of Teachers Dignity Coalition (TDC), an “ambitious” program?

We do not even have sufficient funds for the education sector.If there were, we wouldn’t have simultaneous classes of 50 students each in small rooms divided only by standing blackboards. If there were, textbooks would no longer be erroneous or of poor quality, brought about by the DepEd’s being forced to go for the lowest bidder. If there were, students wouldn’t have to go home at seven o’clock in the evening.

If there were, the public would not have gotten enraged when the government almost intended to use the public funds for former president Arroyo’strips abroad.

If President Aquino’s principle is to wipe out the crooked officials in the government first before implementing reforms, then why can’t DepEd and other legislators get inspired with that? The yellow team said that P-Noy will be the new source of hope and inspiration during his campaign, right?