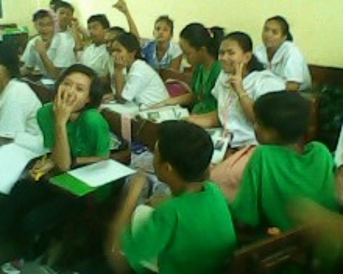 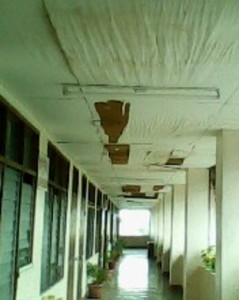 The warped ceiling of the Erap building at QES

The following message is from Earl Victor L. Rosero, who has spent years working in government and in education:

During another visit to my alma mater, Quirino Elementary School, in Project 2, Quezon City, I went up to the fourth floor of the Erap building and discovered that the entire ceiling of the whole floor was peeling off due to water damage from what looked like faulty, substandard construction. Trusting in the assurance of the new administration of good government, I posted pictures of the damaged ceiling on Facebook and tagged the district’s congressman. I also posted the pictures and some information on www.perangbayan.com.

Unfortunately, there was no response or word from either. Maybe my trust is misplaced, the system just works slow, or I should have informed some other people or an agency instead, like Malacanang. I will keep trying. That’s taxpayers’ money wasted over there. Hope springs eternal.

Yes, there is a serious and perennial lack of school buildings, good teachers, good textbooks, and useful equipment and teaching aids. There is also the serious problem of dropouts, especially in high school where the dropout rate is 12.51% at the second year level.

But the DepEd says there is also the glaring disadvantage of having only 10 years of basic education for public school students versus at least 12 years of formal education for the generally more affluent students in the private schools. Two years is 20% of 10 years, and 20% is a significant, decisive difference.

Add to that the fact that the Philippines is among the very few in the whole world making do with a 10-year curriculum while the rest of the planet does much better with 12 or even more years of formal basic education. Can they all be wrong but the Philippi

nes is right? The likelihood of that is very, very low. Much lower than the dismal scores of Filipino students in diagnostic exams and international studies.

The Department of Education reveals that “many students who finish basic education do not possess sufficient mastery of basic competencies. One reason is that students do not get adequate instructional time or time on task.” The extra sessions some students get when they take part in Math MTAP somehow are able to partly address this. 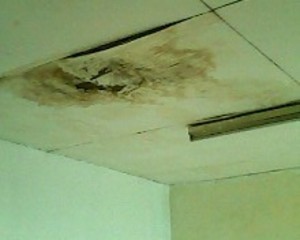 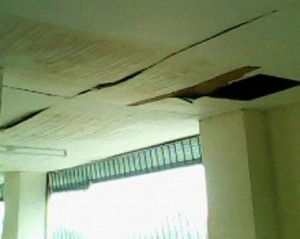 Granting for the sake of argument that the bases Deped cites in pushing for K+12 are all solid, there is still that stark reality that many impoverished families and some middle class households will have the additional financial burden of spending for two more years of the senior high school the Deped has proposed.

Many high school students go to school with little or no ‘baon’ either in the form of cash (PhP20 to PhP50), cooked meals or a sandwich. The public schools have feeding programs, but many teenagers in school refuse to avail of the free meals because of the stigma of being identified as among the poorest of the poor in school. When you’re a teenager, image and peer acceptance are everything in terms of campus social life.

Senior high school will not involve every student in the public schools. It will only affect those who manage to reach their fourth year of secondary level schooling. Senior high will start way out in 2017. The additional two years is not as immediate as it may have seemed to many. 2017 is another presidential election away still. 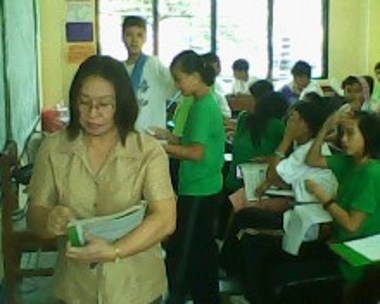 The national cohort survival rate at fourth year high school is only 79.73% as of latest available DepEd figures. In other words, 2 out of 10 who entered in the first year fail to graduate from high school.

At my high school alma mater, Don Quintin Paredes High School, the dropout rate is highest among the second year students: 11.9% for the males and 10.20% for the girls. These rates are already significant improvements from the high 28.57% and 32.69% among third year males in SY 2008-09 and SY 2005-06, respectively. I serve as the alumni representative on the school’s governing council. DQPHS is the smallest high school in Quezon City with only 556 students.

Education Secretary Armin Luistro says the new K+6+4+2 curriculum that extends high school to six years total will be “carefully sequenced” and implemented one year level at a time starting with kinder in 2011 and with Grade One in school year 2012-2013.

Luistro explains, “The two years of senior high school intend to provide time for students to consolidate acquired academic skills and competencies.” Senior high school will have specialized courses in science and technology, music and arts, agriculture and fisheries, sports, business and entrepreneurship. He says that the longer curriculum will give students more time to master the subjects they take and will improve their chances of getting jobs after finishing high school.

In the envisioned new curriculum, a student will get not just two, but three diplomas. Graduation from elementary will mean one diploma. The second diploma comes after four years of junior high school. The third diploma will be awarded at the end of the two years of senior high school.

By the time a high school student will graduate from the new K+12 curriculum, he or she will be about 17 years old.