Why adopt a population and development perspective?

Population dynamics influence all aspects of human, social, and economic development. As such, working on population issues is an important step towards achieving sustainable development and meeting the Millennium Development Goals, a list of benchmarks identified by the United Nations as the basic needs that global society must meet in order to significantly reduce, if not eradicate.

The Philippine Center for Population and Development has adopted a framework that shows the interrelations between the processes and outcomes of population and development. 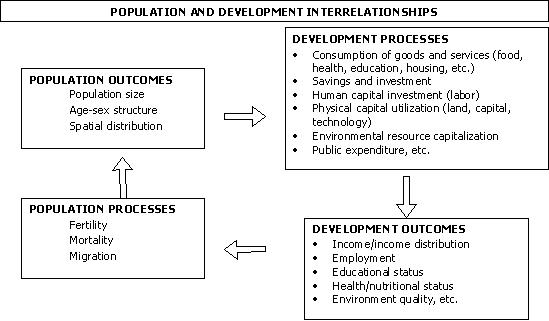 Fertility, mortality and migration – the three identified population processes – inform a community’s size, population distribution according to age and sex, and distribution across its various areas. These, in turn, affect the consumption of goods and services, the utilization of human, physical and environmental resources, and other processes needed to run a community. These development processes lead to concrete outcomes for individual members of a population, such as employment and income, educational attainment, and quality of health – all of which will affect a person’s response regarding the three population processes.

What does population have to do with:

The environment – The size of a community’s population directly impacts on the environment it exists in: both in terms of the amount of the natural resources it subsists on, and the population’s capacity to replenish, conserve and increase these resources. One must also remember that humans are not the only living creatures in the ecosystem; we co-exist with populations of flora and fauna species, and it is necessary to maintain a balanced and healthy environment where all species can thrive. And with the impacts of global warming and climate change becoming more prominent in the last decade or so, human populations must learn to adapt accordingly. Mulat Pinoy’s Kapihan Session on Population and Environment is scheduled on January 16.

Government resources – Policymakers and government officials need to keep track of the latest population statistics to ensure that government is able to allocate sufficient resources and provide the necessary social services. For instance, governments responsible for a population with a large proportion of youth under the age of eighteen would need to beef up its primary and secondary educational system, as well as ensure the availability and accessibility of maternal and child health services. Grey populations, on the other hand, would need better pension services. A population’s spatial distribution must also be considered: this determines electoral districts and, consequently, legislative representation. Mulat Pinoy’s Kapihan Session on Government Resources and Population Dynamics is scheduled on January 23.

Housing – Shelter is one of humankind’s basic needs, a refuge from nature’s elements. But if there’s anything that typhoons Ondoy and Pepeng have taught us, it is that existing structures are not particularly secure, and residential areas ill-planned. Large populations necessarily require more housing, especially in areas of economic growth. But with high market values and uneven economic development, this leads to issues of inadequate housing and informal settling. Having a large population exacerbates these problems. Mulat Pinoy’s Kapihan Session on Population and Housing is scheduled on January 30.

Food Supply – Perhaps the most primary of all basic needs, having adequate food is necessary for one’s survival. Population size is directly proportionate to food consumption, and it is imperative that a population’s food requirements are met, whether by agricultural production or importation from other countries. In addition to food supply, it is also important to make sure that food is accessible to the public, by keeping costs equitable. Of particular importance is the country’s declining productivity in terms of rice production; from being almost self-sufficient during the Green Revolution of the 1970s, the Philippines has become a net importer of rice. Mulat Pinoy’s Kapihan Session on Population and Food Supply is scheduled on February 13.

Education – Education plays a crucial role in economic development. This does not bode well for the Philippines, if the country’s deteriorating state of education is any indication. The mean achievement test scores at the primary level is 50 percent, ten points below the passing grade of 60. Attrition rates are high, with majority of the population failing to finish high school. Funding is channeled to tertiary institutions, but there are not enough classrooms for grade school, which has the highest population. A better understanding of the relationship between population and education would ideally result in a better allocation of resources, and the improvement of the quality of education. Mulat Pinoy’s Kapihan Session on Population and Education is scheduled on February 27.

Health – Population is driven by fertility and mortality, two processes that are directly influenced by health. A high fertility rate means more children. With inadequate living conditions among the poor, this translates to a high infant mortality rate and, for those who survive the early years, nutritionally-deficient children. Key health needs include child immunization and healthcare, sanitation and hygiene, and family planning. Mulat Pinoy’s Kapihan Session on Population and Health is scheduled on March 13.

Urbanization and Migration – One of the three key processes that determine population growth, migration is driven by the search for resources. People will gravitate to areas that provide them with more economic opportunity, often from rural to urban areas. The single largest phenomenon in developing countries is rapid urbanization. More often than not, the influx of people into urban areas far outstrips government’s capacity to build the necessary infrastructure, such as housing, transportation, and other basic services. Mulat Pinoy’s Kapihan Session on Urbanization and Migration is scheduled on March 27.